There’s More to Pumpkins Than Pies and Jack-O-Lanterns

There’s More to Pumpkins Than Pies and Jack-O-Lanterns
While pumpkins are extremely effective as props for Halloween and widely famous as pies, there is so much more to these food than what most people might think.

It’s November and Halloween is over. What’s in store for pumpkins now? Aside from being made into pies, there are also several other ways to cook pumpkin. Pumpkins are not just good for dessert and decoration, but they are also worthy of being the main dish and there are plenty of reasons why.

With pumpkins now piling up at grocery stores, patches, farmers’ markets, roadside stands, and other places, it would be nice if people understood the importance of this vegetable and why it would be wonderful to incorporate it into any dish.

With so many colors and shapes to choose from, pumpkins are interesting vegetables.In Colonial days, pumpkins were a dependable staple of the diet. When other crops failed, the reliable pumpkin came in handy for making sauces, soups, stews , conserves, pudding, cakes, and breads.

Today many pumpkins are known as field or display pumpkins. Cultivated primarily for carving jack-o’-lanterns, they often grow to immense proportions and are exhibited at county fairs for awards and prizes. The field type, however, is not very good for eating, as the flesh is usually stringy and watery and has little flavor.

Not only is fall’s signature squash versatile enough to fit into all the above and more, it also packs some powerful healthy perks — like keeping heart health, vision and waistlines in check, as long as you take it easy on the pie, that is.

Below, we’ve rounded up some of our favorite health benefits of pumpkin: 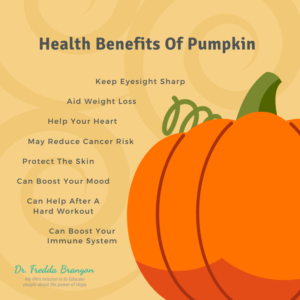 A cup of cooked, mashed pumpkin contains more than 200 percent of your recommended daily intake of vitamin A, which aids vision, particularly in dim light, according to the National Institutes of Health.

Pumpkins are also rich in carotenoids, the compounds that give the gourd their bright orange color, including beta-carotene, which the body converts into a form of vitamin A for additional peeper protection.

Pumpkin is an often-overlooked source of fiber, but with three grams per one-cup serving and only 49 calories, it can keep you feeling full for longer on fewer calories.

A fiber-rich diet seems to help people eat less, and thereby shed pounds. A 2009 study found that people who ate a whole apple before lunch (the fiber is in the skin) consumed fewer calories throughout the meal than people who ate applesauce or drank apple juice, WebMD reported.

Nuts and seeds, including those of pumpkins, are naturally rich in certain plant-based chemicals called phytosterols that have been shown in studies to reduce LDL or “bad” cholesterol.

Like their orange comrades the sweet potato, the carrot and the butternut squash (to name a few), pumpkins boast the antioxidant beta-carotene, which may play a role in cancer prevention, according to the National Cancer Institute.

Food sources of beta-carotene seem to help more than a supplement, according to the NIH — even more reason to scoop up some pumpkin today. And the plant sterols in pumpkin seeds have also been linked to fighting off certain cancers.

The same free-radical-neutralizing powers of the carotenoids in pumpkin that may keep cancer cells at bay can also help keep the skin wrinkle-free, Health magazine reported.

Can Boost Your Mood

Pumpkin seeds are rich in the amino acid tryptophan, the famed ingredient in turkey that many think brings on the need for that post-Thanksgiving feast snooze. While experts agree that it’s likely the overeating rather than the tryptophan lulling you to sleep, the amino acid is important in production of serotonin, one of the major players when it comes to our mood, WebMD reports. A handful of roasted pumpkin seeds may help your outlook stay bright.

Can Help After A Hard Workout

Ever heard of bananas being touted as nature’s energy bar? Turns out, a cup of cooked pumpkin has more of the refueling nutrient potassium, with 564 milligrams to a banana’s 422.

A little extra potassium helps restore the body’s balance of electrolytes after a heavy workout and keeps muscles functioning at their best.

Can Boost Your Immune System

Well, maybe. Whether or not vitamin C can really ward off colds is still up for debate, but pumpkins are a solid source of the essential nutrient. One cup of cooked pumpkin contains more than 11 milligrams, or nearly 20 percent of the 60 milligrams the IOM recommends women need daily. (Men should aim for around 75 milligrams.)

Everything About Autoimmune Disorders