Is it Time to Say Goodbye to Soda? Sugary Beverages Found to Increase Cancer Risk in Women

Is it Time to Say Goodbye to Soda? Sugary Beverages Found to Increase Cancer Risk in Women
Sugary drinks are a staple in women’s lives, but they seem to be providing more than just a delightful burst of energy. They also carry a risk for cancer.

A recent study that was published in the scientific journal Cancer Epidemiology, Biomarkers & Prevention has discovered that women who regularly drank sizable amounts of beverages loaded with sugar, now has a whopping 80% chance of getting endometrial cancer. This is very alarming because majority of women nowadays regularly drink a soda or two almost everyday, and this is just soda. This does not count the canned juices, flavored waters, tea, and coffee.

A group of researchers hailing from the University of Minnesota’s School of Public Health has analyzed the 1989 Iowa Women’s Health Study that has over 23,000 female participants. The study tracked the women’s intake of 127 food items for a period of 12 months. The results were quite revelatory, discovering how the higher the sugar intake, the higher the risk for endometrial cancer. Some of the most regular drinkers consumed as much as 60 servings of different drinks that were particularly high in sugar, from the usual lemonade to other drinks.

So that’s basically saying goodbye to your daily fix of Caramel Macchiato or Green Tea Frappuccino at Starbucks, your good ‘ol vanilla or strawberry milkshake at your favorite diner, or your regular Coke that you buy at the convenience store. This is also more reason to skip on alcoholic drinks, because these too, are high in sugar.

Recently, the World Health Organization has declared outdoor air pollution as a carcinogen, which means it’s a cancer-causing substance. What’s so bad about it is that people cannot do anything to avoid breathing the air outside of their homes, which includes the pollution that goes with the air, so it’s like informing people of something bad but they have little to no way of avoiding it.

The same thing goes for this disconcerting news, because sugar is everywhere, even at home. It’s become a staple in food and in drinks, so it’s going to be hard to control the intake when it’s ingrained in people’s minds to use them on an everyday basis. From morning coffee to hot cocoa before a good night’s sleep, sugary drinks aren’t going anywhere yet, even with such news revealed. People have to be informed that a conventional sugar-sweetened drink contains ridiculous amounts of sugar. Here are a few examples of just how many teaspoons of sugar there are in a certain drink: 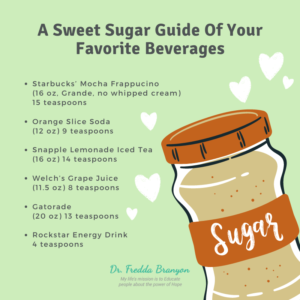 Experts are right in saying, though, that this study is just an addition to the big pile of reasons not to drink these sugary beverages. They have also been known to increase oral health care problems such as teeth discoloration, gum disease, and more. They also increase the risk for diabetes and cardiovascular diseases, to name a few.