Is Coffee Good for Your Mental Health?

Few studies confirm the theory that caffeine presents a negative effect on anxiety, but what other studies found is the exact opposite. A study in Brazil revealed that coffee may help those suffering from anxiety, stress, and mild depression. According to the researchers, people who drink a moderate amount of caffeine (less than 300 milligrams of black coffee or green tea) experienced less depressive symptoms and fewer cognitive failures, indicating that those who drank caffeine felt better, not worse. Only a “rare, high dose” of caffeine is responsible for what the authors of the study termed “anxiety.”

1. An Effect on Mood

Those who drank caffeine tended to have an “improved sense of well-being.” It appears coffee itself has the natural ability to, in the simplest of terms, “lift the spirit.” Research has shown that caffeine may help in calming the mind and reducing mild depression. Several coffee lovers also report feeling better about themselves, with an overall higher level of satisfaction that would, in theory, cut the level of anxiety they experience. 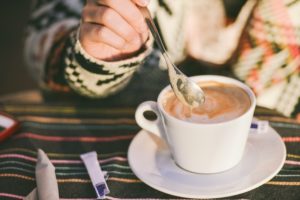 Mental and physical energy are crucial elements of living with anxiety. While anxiety could be described as repressed energy, the reality is that anxiety can often cause fatigue and general indifference to life events. Maintaining an active social life, working out, and completing daily tasks require an abundance of energy, and for many people, caffeine can provide that energy.

A study found that coffee provides profound benefits to one’s memory and cognitive function. Wise decision making and comfort with one’s memory are immensely valuable tools for dealing with life’s stresses, and caffeine could conceivably provide a level of additional support for coping with everyday struggles. 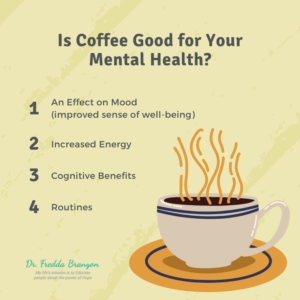 Unlike one’s mood, energy, and cognitive function, routines are more of a secondary way wherein caffeine provides a benefit. Routines are a natural form of comfort. The more you get into a habit, the more comfortable you feel with yourself, your surroundings, and the people you interact with every day. People who drink coffee on a regular basis often start to need it as a way of avoiding withdrawal symptoms (and as an enjoyable drink to kick start the day). This results in forming a habit or routine, like going to a coffee shop or brewing a fresh cup of joe at home every 7 AM, making it more comfortable to do day by day.  Other potential benefits of drinking coffee include the drive to routinely drink it with a group of friends, which provides social support – a critical factor in combating anxiety.

Even though previous studies pinpoint caffeine as a primary trigger for anxiety, existing studies also showcase that a moderate amount of coffee provides tremendous benefit to those living with anxiety. Additionally, even if one does not believe in these benefits, the truth is that there is also very little evidence proving how caffeine worsens the condition of those living with general anxiety. Thus, much like any habit with potential side effects to one’s health, enjoy in moderation!